The Chemistry of Digestion

The human body is an amazingly complex and diverse system.  Millions and billions of processes occur everyday among cells and their environment.  Trillions of iIndividual cells make up the many systems of the body that allow us to function and to perform the activities of life such as movement, response to stimuli, maintaining body temperature and digestion.  We eat, breath, think, comprehend, remember, and move, typically without the slightest thought about exactly how to perform such actions.  We just do them.  Perhaps even more amazing is that humans are relatively self-sufficient.  All we really need is some food, water, and rest to keep us going.  Other things like shelter and clothing may be important too, but the fact is that unless we’re rightly fed and watered, these don’t mean much.

So you might argue that digestion is the most important function of the body. After all, every other system of the body gets its energy and building materials from the food we eat.  But how does a hamburger or an ice cream cone get into our cells?  The answer is by chemical reactions.  The human body functions on a series of complex chemical reactions that originate from the food we eat.  The following is a journey from the tasty beginning to the rather smelly end of “the most important function of the body,” seen through the eyes of chemistry.

It Begins in the Mouth

It is a generally accepted fact that digestion begins with the mouth.  Of course this is in opposition to the common belief among young children that it starts in the ears, nostrils, and or hair.  Even before we actually put food into our mouth, our body begins releasing saliva.  Water, electrolytes and enzymes make up saliva.  Water, known as the universal solvent, helps to dissolve some of the food for easier digestion.  The electrolytes, such as positively charged sodium and potassium, can also help to remove some of the particles of food that may have a d charge.  Lastly, the enzymes such as ptyalin and salivary amylase also aid in digestion.

Enzymes are Essential for Digestion

enzymes are somewhat more complicated.  These substances are complex chemicals with a particular shape and composition built to for a particular chemical reaction.  In this case, to break apart food much the same way as water and electrolytes.  As we chew we also physically break apart food, revealing more of it to the ruthless attack of water, electrolytes, and enzymes.  To write the proper chemical equations for all of the possible processes taking place at this point would be a near impossibility, but we will provide the basics.  For example, when salivary amylase and polysaccharides (long chains of monosaccharides, or sugars) meet, the amylase breaks down the polysaccharide into disaccharides (two monosaccharides hooked together.) 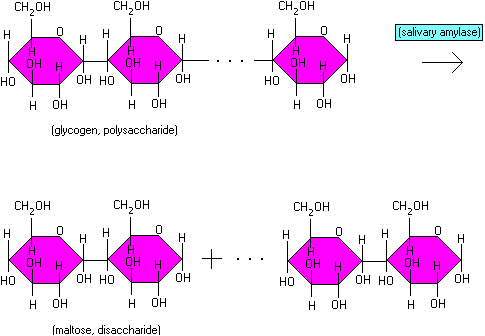 Water is also a contributor in the breakdown of foods in the mouth.  Because of its polarity, it is able to help to breakdown food having either a slight positive or negative charge.  Through attraction towards particles with positive or negative charges, water is able to dissolve some of the food even before swallowing.  Electrolytes do the same, except they are only able to attract the opposite charge.  They are also more powerful than water, just less versatile.  They react much as follows:

Digestion In the Stomach

The next step in the process of food is swallowing.  When you swallow you force food to the back of your throat and down your esophogus.  Your epiglottis blocks off the windpipe when this occurs to ensure that you do not “swallow” food into your lungs.  Upon entering the esophagus, muscular wavelike motions, called peristalsis, carry the solid or liquid to the stomach.

Once in the stomach, food is digested and stored.  The stomach releases hydrochloric acid, which is a major factor in the breakdown of foods.  As hydrochloric acid is a very strong acid, it helps to further breakdown food because of the strong polarity of the H + and Cl – ions.  For example, some of the glycogen (long chains of glucose) that we previously swallowed had been converted to maltose (two glucoses connected together) in the presence of the salivary amylase.  The presence of HCl also breaks apart disaccharides into simple glucose (sugar).

Reduction of Saccarides into Sugars

The stomach also releases an enzyme called pepsinogen.  Pepsinogen in its own right is worthless.  It becomes useful almost immediately however when in contact with either hydrochloric acid or some other pepsin.  Pepsin is a large molecule useful in breaking the peptide bonds holding long chains of proteins together.  This way the proteins can absorb into the bloodstream.  Pepsin is an enzyme which, much like a catalyst, assists in a chemical process but ends up in the same form it started out as.  One particular Pepsin reaction is as follows: 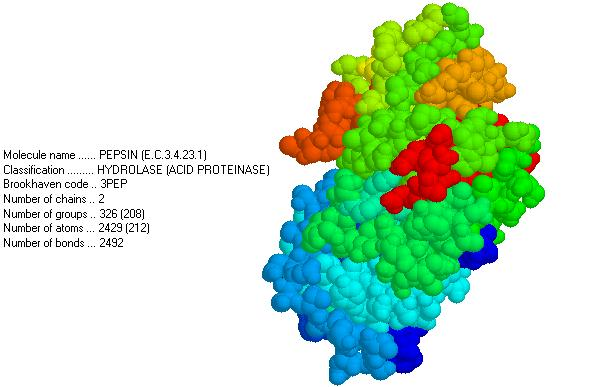 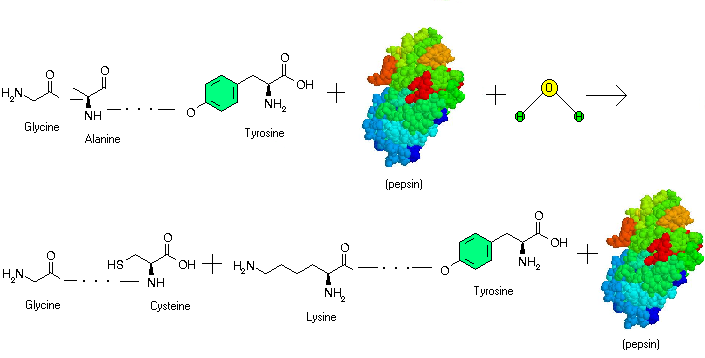 The stomach also secretes mucus to protect its lining.  Because hydrochloric acid in the stomach is so volatile (pH of about 2), it would easily dissolve the lining of the stomach and allow stomach juices to escape. This is what typically constitutes an ulcer.

Digesing Food in the Small Intestine

Food leaves the stomach following a thorough mixing and bath of chemicals.  Then it enters the small intestine.  The  duodenum is the first portion of this organ.  This is where the chyme from the stomach becomes neutral and no longer acidic.  The alkaline secretions also stop the action of the pepsin, which is only effective under acidic conditions.  The presence of chyme, and particularly fat in the duodenum triggers the release of bile, a greenish liquid that contains detergent like substances that break fats into small droplets so they can absorb in the intestine later.  Because the fats are broken up into small sphere-like globules, called micelles, more of their surface are is exposed to pancreatic lipase.  The pancreatic lipase then can hydrolyze the triglycerides (the most common form of fat) into fatty acids and monoglycerides, the main end products of triglyceride digestion.

The Process of Breaking Down Fats 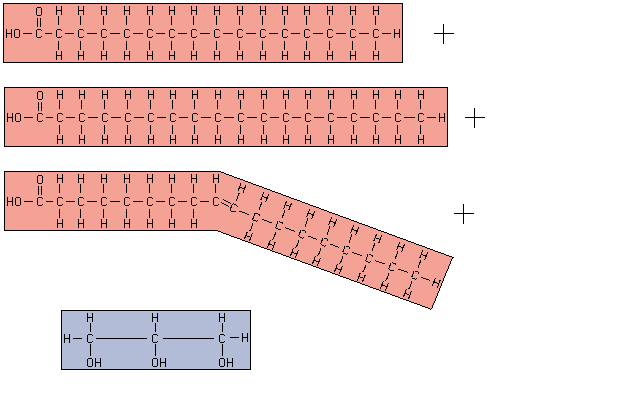 The alkaline environment of the duodenum is what makes all of these chemical reactions possible.  The pancreas also releases insulin, which regulates the amount of sugar in the blood.

Now into the Large Intestine We Go

The next point of passage for the food is the large intestine.  This is the final stage of digestion for the food.  In the small intestine there are many villi, tiny finger-like projections lining the wall.  Since much of the nutrients that will enter the bloodstream, already have, only small amounts of enzymes enter the process at this point.  Proteins finish their breakdown into amino acids and sugars into glucose.  Capillaries in the villi absorb these subtances into the bloodstream through tiny capillaries.  Fat globules enter the blood at this point as well.

Many foods fail to absorb entirely, so there is still some “stuff” left.  While still in its liquid chyme form, this extra stuff is sent into the large intestine.  In order to preserve water however, the body absorbs it out of the chyme and into the body.  So as the material passes through the large intestine, it becomes more and more solid.  Now it is officially feces, perhaps a less desirable by-product of the digestive system.  At this point, all the absorption that can occur, has.  The rest is sent to the ‘garbage chute’.  Then nature calls!  At this point, all the food that originally entered the body has become energy, part of the body or waste.

The grand journey though the human digestive system is fascinating indeed.  It is really quite a complex system of acids, bases, enzymes, and transport.  This complex system of reactions is responsible for making energy and supplying nutrients to all cells of the body, including its own.  Perhaps most amazingly, it is not run by some conscious entity that decides when and how to initiate each step.  Instead, a complex cascade of chemical reactions mediates the entire process.