Dr. Rawlins, a local OBGYN, gave a free seminar that I was at a few years ago.1 He shared a very personal story in which his son experienced a bunch of health problems that could not really be explained by doctors.  However, they all knew that he was slowly dying. Over the course of nearly a year, father and son researched together to find a solution.  What they discovered was the many individuals have some level of inability to use folate correctly, which can lead to illness.

He explained that folic acid (the common source of folate in vitamin pills) undergoes a multi-step metabolic process to be converted to 5-MTHF (short for 5-methyltetrahydrofolate).  This is then able to be used by the body. If a person can’t complete any of these steps, then they become folate deficient.  Naturally, health problems follow.  Nonetheless, some fruits such as strawberries do contain high levels of 5-MTHF.

In fact, there is a story in Dr. Rawlin’s family history that made a lot more sense with this knowledge.  When his great-grandfather was old and in really bad shape, his son took him to the woods to live out his last days.  Everyone was pretty sure that his time was short.  It was spring and there were tons of strawberries everywhere.  Grandpa loved the strawberries and ate them like crazy.  The funny thing was though, that he got much better.  In fact, he didn’t end up dying until years later!  Dr. Rawlins suspects that this relative also had a folate problem like his son’s.  He was probably dying because of a folate deficiency. But eating all those strawberries rich in 5-HTP, brought him back so-to-speak.

Why is this a Problem Now?

Dr. Rawlins further explained that this disorder has only recently become a problem for people.  In centuries past, those with this issue did not tend to live long enough to have kids, yet they do so now thanks to modern medicine.  His research indicated that folate deficiency is the real reason for many health problems such as depression, heart disease and even cancer.  The medical field often treats these symptoms without recognizing what the real problem is. He did not intend to imply however that folate deficiency is always the root cause of any particular disease, but can be and often is.  For instance, doctors often prescribe anti-anxiety drugs for depressive patients, yet the real issue may actually be that the individual cannot produce enough folate.

Folic Acid is NOT Folate 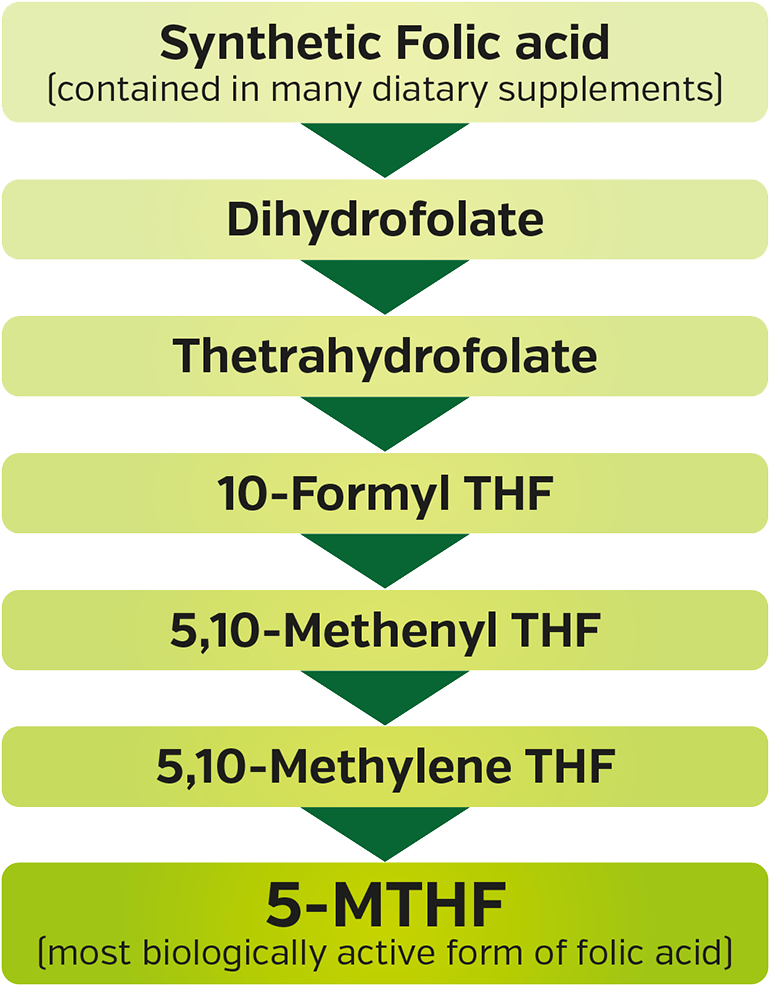 The folic acid that you find most commonly in vitamin supplements and fortified food is NOT folate.   It is more

like pre-folate. After it is ingested, it is converted from folic acid to dihydrofolate.  Then to tetrahydrofolate, then to methylenetetrahydrofolate and finally to methyltetrahydrofolate (5-MTHF).  This is the ONLY useable form. The problem lies in the ability of a person’s body to make this conversion happen.

Studies have found that about 60% of us are heterozygous for a genetic mutation in the production of the enzyme methyltetrahydrofolate reductase, or MTHFR.  It converts methylenetetrahydrofolate to methyltetrahydrofolate. These people are referred to as intermediate metabolizers  meaning that they can convert only some folic acid to usable folate (5-MTHF). Another 25% of people only have the ability to convert a very small amount of folic acid to usable folate.  These folks are poor metabolizers. That leaves approximately 15% of people that are able to metabolize folic acid fully and are thus great metabolizers.2  In short, 85% of us are deficient!

The Genetics of Folate

Two genes control how much MTHFR enzyme we make.  Dr. Rawlins advises that everyone be tested that has any suspicion they may have a mutation in one of these genes.

However, the National Institute of Health recommends that only those with homocystinuria AND one or more of a small list of another condition have the test done. I also mentioned earlier that folate deficiency can lead to heart disease, but the American Heart Association states that testing for C667T/A1286C does not give an accurate picture of heart disease risk. In other words, mutation in these genes does not necessarily increase your risk of heart disease.  However, the research says just the opposite. Folate deficiency also can result in blood clotting problems.  Despite this, The College of American Pathologists and American College of Medical Genetics recommend against testing.3

There are many reasons that folate deficiency can occur.  It might be low intake, problems with absorption, genetic defects and/or drug interactions.  Even normal levels of pre-folate will still lead to too little folate for people with any of these problems.  In these instances, too little actual useable folate is made available to the body. Scientists noticed many years ago that neural tube defects in new-borns were a result of folate deficiency.  Later, links to heart and mental issues and even cancer have also been made.3,4,5  5-MTHF absorbs well, no matter what the pH of your digestive tract or any genetic defects.  Folic acid on the other hand does not.

As a twice cancer survivor, I found the cancer connection to folate particularly interesting. It turns out that high homocysteine levels cause an increased risk of a range of diseases including cancer.6 And folate deficiency and way too much homocysteine usually go together. In other words, folate deficiency leads to high levels of homocysteine which in turn leads to diseases like cancer and heart disease.7 Logically then, if one could ensure that they get enough folate their risk of getting diseases would be reduced.

A recent study proved this to be true.   Two hundred forty-six subjects took 5-MTHF pills on a one month on, 2 months off cycle. Researchers found that patients with higher baseline levels of homocysteine, metabolic syndrome or mutated genes had a higher risk of treatment failure.  However, it also showed that 5-MTHF significantly reduced homocysteine levels in patients with mild to moderate cases of having too much homocysteine.8

Folate supports the brain along with other B-vitamins by helping with C1 metabolism. The biochemistry of C1 metabolism is quite complex, but suffice it to say it is directly involved in brain function. In a fetus, folate is particularly important to the brain  and the connection between neural tube defects and folate is clear.9 This has led to the recommendation that all women who might become pregnant should take 400mcg of folic acid daily. Nonetheless, conditions such as spina bifida and anencephaly still occur.  Perhaps it is not because women are failing to use folic acid, but the result of mutated MTHFR enzymes. Folate deficiency may also be the underlying cause of dementia and mental disorders in the elderly.

There are many natural sources of 5-MTHF, so eating plenty of fruits, vegetables and beans should provide adequate amounts, right?  Not exactly. This may be true for the 15% or so of the population that are great metabolizers. It may even be true for some of the intermediate metabolizers when you consider dietary sources as well as many foods that have added folic acid.10

However, folate is a water soluble vitamin and is quite sensitive to destruction. Heat, light, pH and leaching can all destroy it. In fact, simply washing a piece of fruit can decrease its folate content.11 This means that dietary sources may not be enough to supply enough. Those who can use folic acid will likely be fine. But poor metabolizers may get little to none from food and thus suffer from folate deficiency.

In two major trials, researchers looked at the effect of B vitamins on stroke.  They wanted to see if they reduced levels of homocysteine and if so, by how much. Folate levels and the risk of stroke have proven to be related.  Both of these studies showed that homocysteine levels were only somewhat affected by the use of folic acid and other B-vitamins.12  In contrast, researchers found that 5-MTHF given to patients increased the concentration of folate in the blood by 7 times that of folic acid. This turned out to be true for all participants no matter what their genetics.13  In other words, even the great metabolizers benefited far more from 5-MTHF than plain old folic acid.