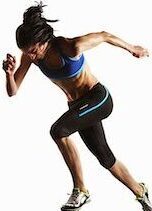 There are a million and one places to learn about proper running form, ideal diet and exercise routines that will prepare you to race at your best.  So, I’m not going to discuss those.  I’ll assume you already know and implement those things or at least are going to.   My concern is the things that few people are even aware of.  These are the running race tricks that are most relevant when your other bases are covered (i.e. diet, routine, form, etc.).   That being said, these tactics may only shave off a little time, the longer the race, the bigger the impact.  So, if you are running a 5k, you’re probably fortunate to save just 30 seconds off your time.  But extend that to a half marathon (13.1 miles) and you might be saving 2-3 minutes.  That’s pretty significant, as you  know if you are already a runner.

When a race is measured, it is never done through the shortest path.  Think running on the outside lane of a track rather than the inside.  It’s a lot further.  The same is true in nearly all foot races.  There are bends and curves, sometimes a lot of them.  Thus, there is an “outside” and an “inside” lane.  If you find the shortest path, you aren’t running quite as far and therefore finish the race more quickly.  Yeah, you’re supposed to run on the right and pass on the left and on straightaways that’s fine.  But if you want to finish in the shortest time possible, you have to put priority on following the shortest path.

2) Drink Caffeine At the Right Time

Research has shown that caffeine improves physical performance.1  But most people don’t do it right.  They often start the race with it pumping through their system, making it near impossible to avoid the temptation to shoot out of the start line too fast.  After a short time, their body just can’t keep up to their energy levels.  They may still finish the race a tad faster, but they could have done better.

Racers know, and I can attest to this from first-hand experience, that a fast pace at the start of a race is usually a bad thing, unless its a short race.  You just can’t keep it up.  But at the same time, you want to have the boost that caffeine gives you.  A better option is to bring your caffeine to the race.  Don’t bring a beverage, rather a shot or pill.  Take it about 10 minutes before the race begins.  That way you don’t have it in your system when the race starts.  First of all, that makes it easier to avoid the temptation to start off too fast.  Secondly, it will kick in later in the race when you might normally start getting tired.  You might not even notice it, but you will notice that you aren’t dragging.

3) Run on the Hardest Surface

Let’s think physics for a second (no math, I promise!)  What makes more sense to run on; wood chips or pavement?  While you may not be an engineer, you realize that wood chips have more “give” than pavement.  In physics terms, you lose more energy to the wood than the road that otherwise would propel you forward.  The same is true, for grass, gravel and even dirt.  So, if you are in a race, always run on the hardest surface.  If you don’t, you are wasting energy and increasing your race time.